As a condition of approval for the Harbour Solutions Project under the Canadian Environmental Assessment Act, HRM undertook a water quality sampling program for Halifax Harbour.  Between June 2004 and September 2006, weekly samples were collected for fecal coliform bacterial analysis, and bi-weekly samples for more extensive chemical analyses.  Beginning October 2006, sampling was bi-weekly for both bacteria and chemistry, and monthly in 2010.  Samples were collected at the surface and at 10-meter depths.  Regular sampling locations are shown on the map below. 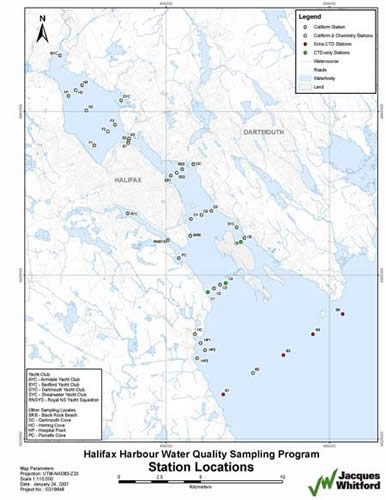 The program began in June of 2004, and was scheduled to run until at least 2009, at which point it was anticipated that all three of the new Harbour Solutions sewage treatment plants would be built and operating.  There were some delays in commissioning the Herring Cove plant, and the Halifax plant was affected by a flood in January 2009, so the sampling program was suspended in June of 2009.  It resumed as the Halifax and Herring Cove plants approached fully operational status, in May 2010.  The purpose of the program was to assess whether the defined water quality objectives for the Harbour are met with sewage treatment in place.  As of June 2010, all three plants were fully operational.

More information on the sampling program and results is contained in the quarterly reports, which describe the data for three-month intervals.